In May 2000, the MGZ was certified by the German National Accreditation Body (DAkkS). According to the DAkkS, the MGZ meets all standards and fulfils all requirements in terms of both science and medicine.

Geneticists at the MGZ offer comprehensive counseling with regard to all questions in the field of human genetics and genetic diagnostics. The work carried out at the MGZ is always in accordance with the most up-to-date medical and scientific knowledge.

The purpose of every genetic counseling session is to assist patients in making important decisions regarding their health. To this end, the staff at the MGZ – Medical Genetics Center Munich strives with great care and precision to find potential genetic causes for concrete illnesses.

Based on the information gathered, geneticists can

Patients with the following indications, diseases, or complaints should consider making an appointment for genetic counseling and (if applicable) arrange for medical genetic testing: 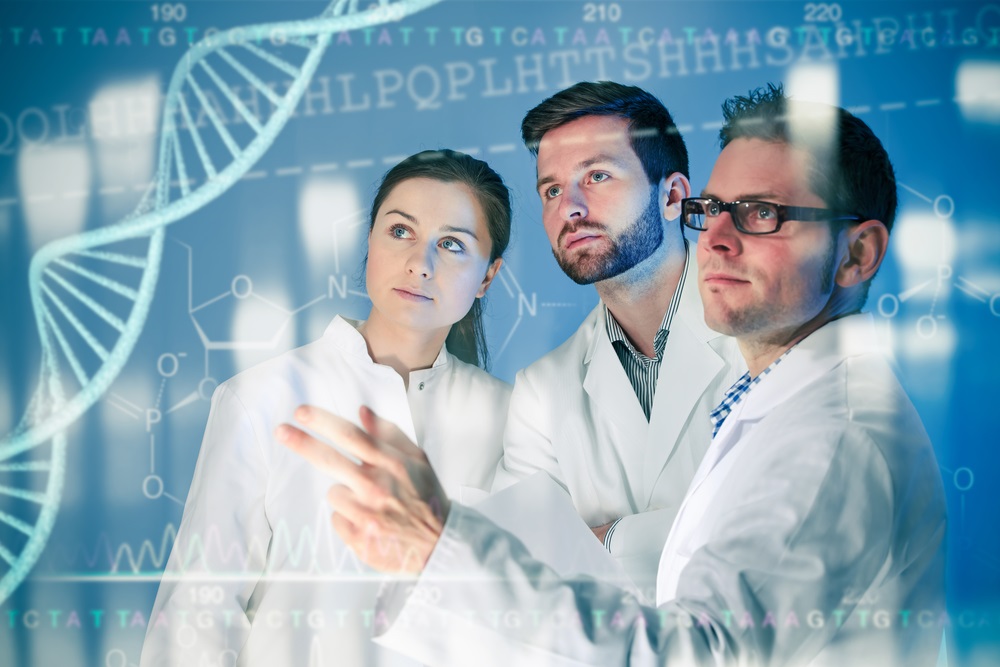 We now know that a certain number of cancer syndromes are caused by monogenetic abnormalities. This means that hereditary cancer-causing mutations in a single gene may be the only cause of the disease. Breast and gastrointestinal cancers are the most common of these disorders. For example, a monogenetic cause is found in 10 % of all cases of breast cancer. An early age of onset or several first-degree relatives with cancer are especially indicative of a genetic cause.

Hereditary breast cancer is often the result of mutations in the two high-risk genes BRCA1 and BRCA2, which are also associated with a markedly increased risk of ovarian cancer. Approximately 1 in every 400 people is a carrier of such a mutation. Furthermore, a number of other genes have been identified in which mutations may be associated with an increased risk of breast cancer and/or other cancer syndromes. Genetic testing can provide clarification with regard to genetic predisposition and appropriate preventative care in individual cases.

Genetic counseling can be especially useful in the area of prenatal diagnosis. Prospective parents need to be given comprehensive information about the possibilities and limitations involved in genetic testing. Only when patients have all of the available information can they make an informed decision.

Genetic counseling before or during a pregnancy should be recommended particularly when:

What is pre-implantation genetic diagnosis?

Pre-implantation genetic diagnosis is the genetic analysis of individual embryonic cells prior to the transfer of the embryo to the uterus during the course of in vitro fertilization.

Polar bodies develop during maturation of the ovum and each contain a part of its genome. Testing polar bodies thus enables us to draw conclusions regarding the presence of a chromosome anomaly or a severe genetic disorder inherited via the maternal germline.

Blastomere biopsies are normally performed on the 3rd day of fertilization, when the embryo consists of 6 to 8 cells. Blastomere analysis is forbidden by German law, because the cells are totipotent at this stage, which means that every individual cell is capable of developing into a life form.

A trophoblast is part of a differentiated blastocyst. Trophoblasts form on the 5th day following fertilization. Subsequent to transfer of the blastocyst to the uterus, the trophoblast develops into the chorionic villi. Trophoblast cells originate from the same cell as fetal cells and thus contain the same genetic material. Trophoblast analysis thus enables us to draw conclusions regarding genetic abnormalities in the developing fetus. The analysis of trophoblast cells is regulated by the German Pre-implantation Diagnosis Act.

Appointments for genetic counseling: Munich and branch offices in Bavaria

Other appointments by special arrangement.

Genetic counseling in English and other languages

Genetic counseling is available in German and English at all MGZ locations. At the office in Munich, the center also offers genetic counseling in French, Spanish, Turkish, Russian, Serbian, and Farsi. Should you require counseling in a language other than English or German, please mention this when you make an appointment.

Registered medical specializations
Place an inquiry now Back to search